Today is the day that Mexicans commemorate the day in which the Virgin of Guadalupe appeared to Juan Diego. Many people make pilgrimages to the Basilica and there are various celebrations. They say to be Mexican is to be Guadalupano (or a follower of Guadalupe).

I wrote a paper called, “The Early Foundations of Mariology” for one of my seminary classes. You can download it here (PDF). It talks about Mary in early church history.

I’ve also visited the Basilica many times. Each time I’m there, I take a some pictures. Here are some pictures I’ve taken, uploaded to Flickr and tagged with Guadalupe.

I’ve read and written many things about the Virgin of Guadalupe. Here are some previous posts I’ve written about this day:

Resources about the Virgin of Guadalupe

We were outnumbered in our house yesterday by Mexicans because we invited some friends over to share the festivities with us.

The youth pastor of our church and his family were there. A music professor from the seminary and their family was there. Jon and Nicolle, the interns from Huntington who are here until December, were there.

It was a great Thanksgiving. It’s always fun to share family traditions with spiritual family. Since we’re far away from “home”, we enjoy trying to create the same atmosphere here as if we were in Florida. I think we achieved that yesterday. 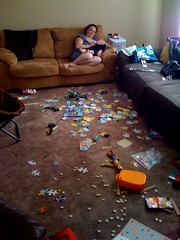 Of course, the honored guest was the turkey (imported from the country of Chile). Janell did a wonderful job cooking everything, and we all had that too full and tired to move feeling at the end of the day while watching the football games.

The kids had a great time, too, although the house took a beating because of it. There were toys everywhere. Luckily, we stayed on top of cleaning up, so the evening wasn’t too terribly full of washing dishes.

I am thankful that we can have this tradition even living here in Mexico. I love sharing something that is 100% American with people from another culture. It’s pretty fun for everyone…except the turkey.

More Than One Million Children Work In Mexico

A recent study by the Secretary of Work and Social Provision revealed that one in eight (more than 1 million) children between the ages of 5 and 13 work and 2,500,000 teenagers must work to help support their families.

Of teenagers aged 14-17, sixty percent work, and of those who do work, almost half (47%) work at least 35 hours a week, causing the number of teens who don’t go to school because they work to be more than 1.4 million.

As I’ve mentioned before, Halloween is growing in popularity in our part of Mexico City. The stores are full of Halloween costumes and other things related to the holiday. I think I’ve seen more stuff related to Halloween than Day of the Dead.

Christians, however, have definitely taken a stand-off approach to Halloween. The picture that accompanies this post was taken at ExpoCristiana two weekends ago (click here to see the pic). In case you don’t know Spanish, it says, “Say ‘No’ to Halloween.”

Tomorrow, in my Youth Culture class, we will be having a discussion about a Christian’s perspective on Halloween and The Day of the Dead. I want them to think about their own beliefs instead of traditional teaching. It should be interesting. I’ll report back.

In the meantime, what’s your perspective on Halloween?

This Saturday, Jon and I went to ExpoCristiana, a gigantic Exposition of Christian books, music, and everything else imaginable. We went with Huberto and some of the young people from his church.

While we were there, Jon and I made an incredible cultural observation: Mexican young people love bracelets.

I snapped these pictures on my camera phone for proof. We spent at least 10 minutes standing at this booth looking at the bracelets. 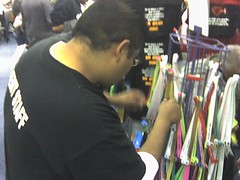 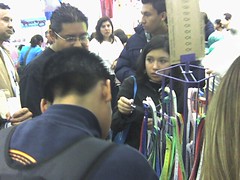