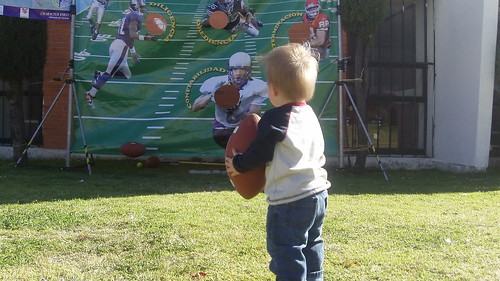 
I went to the Miami Dolphins’ vs Steelers game with my Dad, Uncle, and cousin. It was Don Shula’s 80th birthday celebration at the stadium. We had a good time.

Today I told Nathan we were waiting for the Miami Dolphins’ game to start, and he replied, “Miami Dolphins, I better get ready.” He then went and got his jersey and put it on all by himself.

It was an excellent game, where Miami beat Buffalo 38-10 with their backup quarterback. Finally, we got one win this year.

Well, after the game, Nathan and I did our version of the Miami Dolphins’ fight song.

Posted via email from Life and other things…

Not sure what I think about the remixed fight song. I think I like the old one better. Hopefully, we’ll hear this one a lot this year, though. I’m ready for football season.

I hadn’t seen this commercial last night during the post-game show of the Super Bowl, but my friend showed it to me today on Youtube. It’s great.

The game was great, with the Giants taking the lead for good with 35 seconds left. 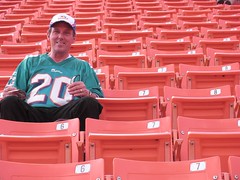 Dolphins vs Bengals with Dad

I just got back from a road trip to Miami with my dad. For Christmas, I bought tickets to the Miami Dolphins’ last home game of the season, and I invited him to go with me to the game.

We drove over on Saturday and stayed until this morning. We got to stay with my Aunt and Uncle who live in West Palm Beach, and on Sunday, we headed out to Dolphin Stadium to watch the Dolphins lose to the Bengals 38-25. Since the Dolphins have been so bad this year, we joked that we would be the only ones in the stadium. We got there early and snapped the picture of Dad in the stands with nobody around. It was a fun day.

The best part was getting to spend time with Dad. Since I live so far away, we hardly get to see each other, and we especially don’t get to do too many things just me and him. I’ll never forget the trip, which is what I was hoping for when I planned it. I guess you could say I gave him this Christmas present with selfish motives. 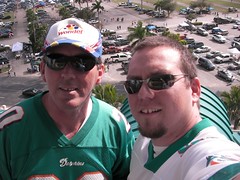 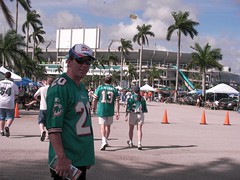