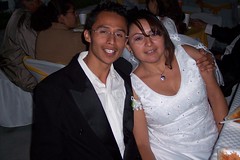 Well, the wedding was interesting. We arrived at 2:30, which was when they told everyone to get there, even though we didn’t plan on starting until 3 (That’s the way it works in Mexico). We helped set up the sound system and then ran around looking for people that needed to be informed about things in the ceremony. Then it started raining. The reception was going to be outside under a big tent. Three o’clock rolled around, and the bride’s dad still wasn’t there. We waited. And we waited. And we waited some more. We waited until 4:15 at least to start the wedding without him. The groom and I stood under a bus stop waiting for him in the rain. So, we started without the father of the bride. The ceremony was fine. It wasn’t too difficult. There are always things that don’t go according to plan, but it was okay. 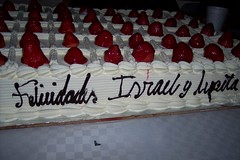 Then came the reception. It was raining, so the people couldn’t get to the tent without getting wet. They had to sweep the water off of the basketball court where all the tables were. Then we waited again. The food took a long time to get there. We didn’t eat until at least 6:30. Janell and I had to go home to get more clothes for Nathan because by this time it was freezing outside. So, we came back, and the food was there. We had carnitas, rice, and some spicy chiles. Then, we were drinking this red soda. Janell had Nathan on her lap, and he decided to grab her cup, spilling the soda on her and him. It was all over him. Luckily, it wasn’t cold because there was no ice (They don’t use ice much here). Whew! We survived, and it ended up being a fun day.