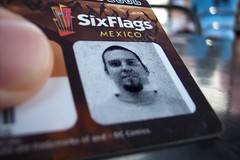 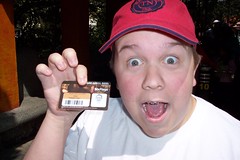 So, Carson and Cole and I went to Six Flags today. Cole took the day off from his job at the school, and we decided to buy our annual passes. We went to the pharmacy to buy our passes (funny that you can buy Six Flags passes at a pharmacy), but it turned out that this particular pharmacy only had one annual pass left. So, we had to look for the other pharmacy. Luckily, it was near the “transito” office, where I have been a few times before. We finally found it and bought the passes. That put us off schedule, but it was okay. We still had to wait in morning rush hours traffic anyway. 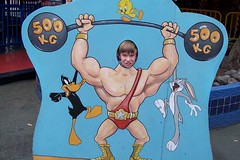 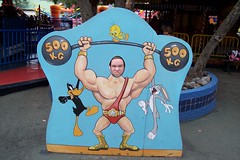 Our plan to go to Six Flags on a day when there would be nobody there backfired drastically. There were lots of people there, and the wait for the major rides was huge. Carson and Cole waited in line for the Batman ride for about an hour and a half. I decided to wait in the shade, sitting down. That’s the good thing about having an annual pass.

We had a good time on the non-major rides like the ferris wheel, swings, and other little things. They went on “The Crazy Pineapple,” but there’s no way I’m going on that again. Been there. Done that. Almost puked. I’m more of a roller coaster type of person. Which made me happy when on the way out we went on Superman, and there was little wait. Cole and I decided to go in the first car. It was awesome. Overall, it was a fun day. And the traffic on the way home wasn’t that bad, either. 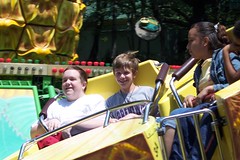 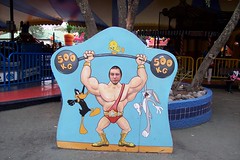