In a previous post, I mentioned a term: Religious Syncretism. I had thought that I had posted on this before, but it was my drafts. Syncretism in Mexico is very noticeable. Besides the syncretism that exists in the Day of the Dead celebrations, here are two pictures of what I mean: 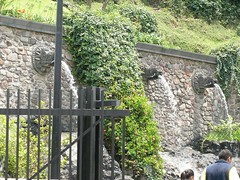 The sculptures in the first picture are of Queztalcuatl, an ancient Mexican god that predates the arrival of the Spaniards. The descriptions of this god are abundant at the pyramids (Teotihuacan, or place of the gods), and it is expected there. This picture was taken, however, at the Basilica of Guadalupe, a catholic basilica, which is the second most visited catholic site in the world; second only to the Vatican. 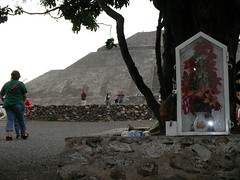 This second picture was taken at Teotihuacan, the pyramids that are located north of Mexico City. These pyramids have a temple dedicated to Quetzalcoatl, one of the many ancient gods that were worshiped at this site. The pyramids have a grand ancient religious background. But the image of the Virgin of Guadalupe can be found there, too.

When I say syncretism, I am talking about this mixture of beliefs.