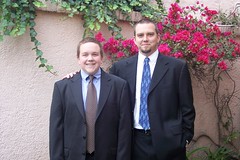 Last night, Cole and I went to the Metropolitan Theater downtown for the Premios Arpa. They are music awards for Christian musicians in Spanish.

We arrived quickly, with little traffic, and we had planned to valet park at the event. But the road that the theater is on was blocked off for a parade, so we had to improvise and park in a public parking lot a block and a half away.

The awards show was much better than I had expected, despite the fact that it started a half an hour late (I’ll never get used to that). We had second row seats, and all the people who were receiving awards were sitting a row or two behind us.

I had a great time with Cole. He’s graduating this year and going away to college. I’ll miss him.