So, I went with Paco to the soccer game last night between Mexico and the Congo. It was a great experience. We left at 5 pm so we could get there and get our general admission seats (about $15). We got to Estadio Azteca around 7 pm because there was a ton of traffic due to the fact that they closed down one of the main roads in Mexico City for a huge protest. 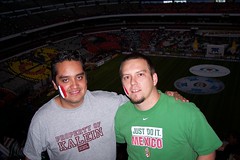 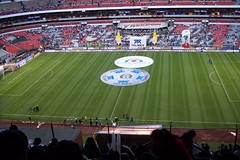 When we arrived, we parked and went in to the stadium, where there was a ton of activity. We painted our faces with red, white, and green, and we went to look for our seats. We got some decent seats in the upper deck (general admission, remember), and we were ready for the game. After our two hour wait, the game started, and the only way I can describe it (even before the game) is as a whole bunch of constant noise. Mexico won, 2-1, and when we left, we could barely hear anything. The stadium was rocking and everyone went home happy, except for the Congo team. I’ll post a video later so you can hear the crowd.

Of course, even though there was little traffic on the road we would usually take home, it took us a long time to get home bacause they had closed it for repairs. So, we had to go a different way, and at 11:30 pm, there was tons of traffic. Ahhh…Mexico City. 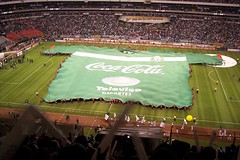 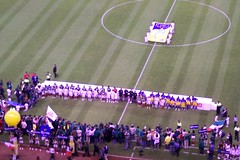