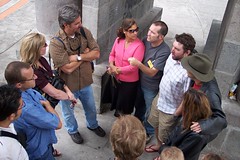 One day while we were in Quito, we went to a busy area for lunch. They gave us each $10 and the assignment to use that money to impact someone’s life. Janell and I went together, so we had $20.

We were looking around for someone to impact, and we saw this lady with a baby on her back. She was selling ice cream from a cart in a park. We thought it would be great to buy all of her ice cream so she could go home. She was talking to another vendor, so we went up to try to talk to them about their jobs, etc. He was her husband. Their names are Gloria and Franklin. We bought $20 of their ice cream, which was 40 bars. They said they could now go eat lunch because they had made that money.

We thought we could make an impact on people by giving away the ice cream bars, too. So, we walked through the park giving away ice cream. There was one particular group of teenagers sitting up on one of the slides. It was a group of about 10. We approached them, but only two stayed to talk to us and get the ice cream. The rest took off a little ways away.

At first, they thought we were selling the ice cream and refused it, but when I told them it was a free gift, they took it with a weird look on their face. They asked why we were doing this, and I told them just because God loves them. They were fairly stunned. It was the first time anyone had ever given them something for nothing, and they couldn’t really understand it. They wanted to know more about the church we were with because no church had done anything like that for them before. So, Russ came over and talked to them more about what’s going on in Quito with the church, etc.

I don’t know how much of an impact we had on their lives, but they impacted the way I think about the church. We need to be more interested in giving than receiving. We need to be more focused on people than our programs. That is how we will impact others. It’s amazing how $10 goes a long way.