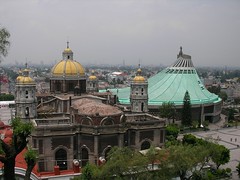 Today is one of the most important religious holidays in Mexico City. As of right now, more than 5 million “pilgrims” have arrived to the Basilica de Guadalupe, the second most visited catholic site in the world.

They have arrived to celebrate the day when Guadalupe allegedly appeared to Juan Diego in 1531. They say that to be Mexican is to be a follower of Guadalupe, and it really shows on December 12. Banks are closed, and tons of people have arrived to the already overcrowded metropolitan area.

This morning, as I was driving to the airport around 5, we saw huge processionals of people who were finishing their pilgrimage to the Basilica. They come on foot, on bike, and even on their knees. They were carrying gigantic images of the Virgin, and we even saw some trucks decorated.

Days like today cause me to reflect a lot about faith, religion, culture, what I believe, and what others believe. It’s a difficult day for me. I’ll write more, but right now, I need to reflect.

Related: Wikipedia: Our Lady of Guadalupe; Pilgrimages; Basilica of Guadalupe and Chapultepec Castle (video); Syncretism; The Beauty of the Gospel; Guadalupe Conference; The Virgin of Guadalupe; My Flickr photos tagged Guadalupe