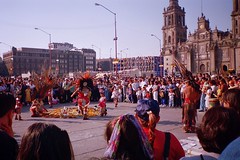 This post is a response to a comment by Jules, asking where she should visit in Mexico City. I originally titled it, “Top Five Places…,” but I decided that I wasn’t sure if these were the Top Five or just five really important ones.

Anyway, if you’re going to visit Mexico City and are looking for some things to do, make sure you check these out.