Here’s a flyer I made to send home at the Mexico City Christian Academy for our youth group meeting on Friday. We’re going to be talking about changes that come in life and how to deal with them. I think it’s a good topic , especially for this group of kids.

Tonight from 6-9 pm, we will be leading an activity for the high school students from Mexico City Christian Academy. It’s been a while since we’ve done anything like this, but our good friends asked us to do it, so we’re going to have something once a month for them.

They have promoted it as a fun time, so I’m in the middle of trying to figure out some fun things to do. It seems I’m not as fun as I used to be. We’ll see after tonight.

I teach in middle school and high school chapel at Mexico City Christian Academy (an English speaking school serving the missionary and foreign community in northwest Mexico City) every other week. This week, the director isn’t here, so I am also teaching the all-school chapel this morning. For some reason, I’m not exactly thrilled about it. Maybe it’s because you never know what to expect from little kids. Maybe it’s because the age range is just so big (K-12th grade). Anyway, if you think about it, pray for me.

Today, I spoke in chapel at MCCA. I finished up the study we were doing on bad guys vs. good guys. I took the info from Jonathan Edwards’s Treaty on Religious Affections. After chapel, I had to hurry to the seminary for a faculty meeting that lasted until 12:30. I stayed there working until 1:30 pm, and then I came home and spend time with the family.

We went to the store, got some Krispy Kremes, and watched the Florida Gators win the National Championship. Oh…I also posted a video of Above and Beyond for Videoblogging week.

Oh, by the way, today marks the end of an era. We finally got rid of Compuserve. We no longer have our @cs.com email addresses, so please only use the gmail ones that you should already have.

I was sad today because the water was too cold to go in the pool. We put some in there, I stuck my feet in, and they about froze. So, we couldn’t go in the pool today.

We did go to the tianguis (little side of the road traveling markets) and bought some fruit (also priced some stuff for the group). I also spoke in chapel at MCCA. We went to Sam’s Club, Burger King, Costco, and a Home Improvement Store (to look for boards for the group). We had dinner with the Torbert family, so it was a good day.

I have a meeting tomorrow night with the owner of a gymnastics school about the mats we need for the group, so please pray we get it all worked out. 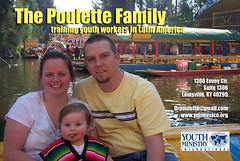 We had a good picture taken of us at Xochimilco a few weeks ago, so we made it into a prayer card. We had them printed today, and they’ll be in the mail to our newsletter mailing list soon. If you’re not on the list but want to be, let us know.

Today, I spoke at MCCA chapel early in the morning. Then, I went to the seminary for a little while, and later, we went to Rene and his wife’s house for lunch. Huberto went with us, and we had a good time with them. Rene has been a good friend, and he drives the bus for all of our groups. He’ll be driving for us when the group comes in March, too.