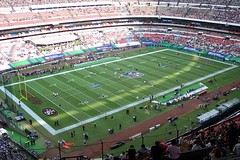 So this is probably one of many posts about the football game that I went to last night. I’ve already mentioned that it was the first regular season NFL game outside of the United States. I had so much fun. We got there really early, so we had time to check out the stadium, which was easy to find (surprising here). The parking was good, and we had decent seats (general admission upper deck). You could see pretty well from where we were.

The stadium holds around 110,000 people for a soccer game, and the official attendance at last night’s football game was 103,467. It was the largest crowd for an NFL game in history. The Mexican people are really great spectators, and we did the wave about a million times.

Some things that are different here than in the US: 1. They sold ramen noodles as concessions (also…donuts, Domino’s pizza, tacos, and bags of chips); 2. The food was relatively cheap (30 pesos, or $3 USD for a personal pizza); 3. EVERYBODY went crazy when they announced that Mexico’s soccer team had won their game (the US football players had no clue); 4. We left in the middle of the 3rd quarter, and there was nobody in the parking lot; 5. Stadium parking only cost $4 USD; I am sure there will be more as I have more time to think about it.

If you want to see my pictures from the game, click here. 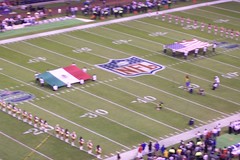