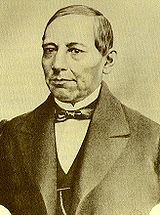 Today is Benito Juárez Day. Actually, Wednesday is. But it’s being celebrated today because that way it is a three day weekend (I think that got imported from US culture). Anyway, there’s no work today at the seminary or pretty much anywhere else.

Benito Juárez is considered one of the great presidents of Mexico. He was the president who helped with the separation of church and state, which in Mexico meant that the Roman Catholic Church lost some of its political power during his time. If you know anything about church history, you know that absolute power corrupts absolutely, so this was a good thing.

He’s also the president who fought for the rights of the indigenous population. During his presidency, he stopped paying the Mexican debt to some foreign countries, causing problems in foreign affairs. It actually led to the invasion of Mexico by France. A Mexican victory against France in Puebla is the victory commonly celebrated (more in the US than in Mexico City) as Cinco de Mayo, but that’s a story for another day.

Check out the story of Benito Juárez here, and enjoy the day.