Today is a continuation of Christmas here in Mexico. On the church calendar, it’s epiphany. But in Mexico, it’s more commonly known as “El Dia de los Tres Reyes Magos.”

It’s the day that the Magi arrived to visit baby Jesus. The “three wise men” even have names here: Melchor, Gaspar, and Baltasar. One of them rides a horse; the other rides a camel; and the other rides an elephant. Of course, they come bearing gifts of gold, frankincense and myrrh.

But for Mexican families, they come bearing presents for the children, too. On the 5th of January, the children write notes to the three kings (Los Tres Reyes) and tie them to helium balloons. Then, when they go to bed, they put their shoes under the Christmas tree (yes, it’s still up), and in the morning, they see what the Three Kings have left for them.

Oh, and of course, there is the Rosca de Reyes, an oval sweetbread, decorated with candied fruit. Each person takes a turn to cut their piece of the bread. Inside the bread, little baby Jesus figurines are hidden. The person who gets the baby Jesus figurine has to host a party for their family and friends on February 2.

So while the rest of the world has moved on and packed away their Christmas things, we are still celebrating the birth of Jesus, thinking about the Magi, and having fun as a family. Happy Dia de los Reyes Magos. 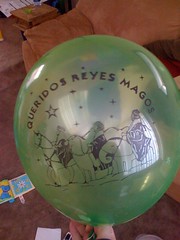