Lately, it’s been pretty hot in Mexico City. The weather has reached over 30 degrees Centigrade (86 F) a lot lately. March is the hottest month, and it’s been hotter than usual this year. The federal government has issued warnings, reminding people to take precaution when going out for long periods of time.

We have a great way to beat the heat. We play in the sprinkler.

Today I took this picture of Nathan, and I remembered one that I had taken last year about this same time. He’s growing up a lot. 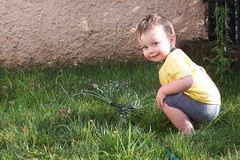 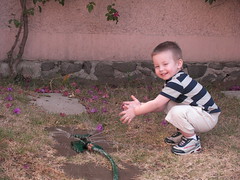