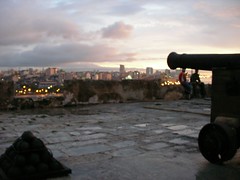 Back in the 1700â€™s, Havana was a walled city ruled by the British. Each night, in order to signal to everyone that the city was closed for the night, they would shoot off a canon. The doors would be locked, and nobody would be allowed to enter or leave the city until the morning.

This ceremony is repeated each night in Havana at 9 pm. I had the chance to go see it while I was there. Itâ€™s really fun as you get to see the night caller come in and light the torches. Then the guards come in, perform their ceremony, and light the canon blast that can be heard throughout many parts of the city. There are still remnants of the old walls of the city that you can see. Itâ€™s a cool little ceremony.