This is what it’s all about when you’re five:

Baseball on the iPhone

If you follow me on twitter or know me personally, you probably already know I have grown to be quite a baseball fan, especially the Tampa Bay Rays. We’ve watched them since they were born and have been through some rough years. All that changed last year with their first ever World Series appearance and this year with 3 Rays on the verge of making the All-Star team. Then along comes this.

You can now watch MLB baseball on your iPhone or iPod touch. I haven’t bought the app because you only get 2 games per day and I’m not sure I want to shell out $10 for it. But, it’s great to see major sports league using technology to improve the fan experience. Go Rays!!

From Worst to First

Last night was the end of a Cinderella season for the Tampa Bay Rays. It was an amazing run of going from last place to first place in one year. They won 97 games in the regular season this year. That’s amazing.

Since we were in the Tampa Bay area for the summer, I had the chance to watch this season up close. We watched most of the games this summer, and kept up with how they did. It was a tremendous transformation.

The American League Championship Series was something I’ll remember for a long time. Beating the Boston Red Sox is always fun. Now it’s even more fun.

But the Rays didn’t do it the way most teams do. They have the lowest payroll in the league, and they beat teams that had millions more dollars to spend. They did it with teamwork. Their motto all season has been 9=8, meaning nine guys playing hard and working together for 9 innings would allow them to be one of eight teams in the playoffs. 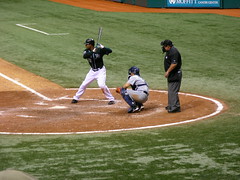 The Tampa Bay Devil Rays won 13-12 yesterday against Seattle. We had fun going to the game with our good friends Mary and Richard. It was a pretty exciting game if you like lots of hitting and not a lot of good pitching. It was good to get out for a while. Thanks, Mary and Richard!